I’ve been out of the loop for the past 4-5 days, but last night I listened to a podcast and heard that he might run as an independent if not nominated. I was wondering what others think; people that have been keeping up with stuff. I heard that the head of the Republican National Committee, or something like that-Grover Norquist I think, was getting the Republican candidates to sign a pledge saying that they would endorse whoever got the nomination. Not sure how true any of this is but if anyone knows anything and could let me know I would appreciate it.

Sorry, I know this isn’t really a post, but, as I said I’ve been out of the loop, I’ve been having to deal with some serious family problems and, well, things haven’t been going very well. But I am interested in this election; and the nomination process particularly.

On the Democrat side, I started off fully supporting Hillary Clinton. And even though I still think she would make a terrific President, I’m not sure that she can get elected. Her campaign just doesn’t have the oomph, momentum, whatever. And I’ve always liked Bernie Sanders, so I’m sort of teetering. If anyone could shed some light on this I would appreciate that. I think a Hillary/Bernie ticket would be awesome though. I’ve always really liked and respected Barney Frank too but that’s neither here nor there.

Anyway, thanks for any info that could be throne my way. I need something to get me out this funk this family drama has me in. Thanks..

Source: Millennials according to the media

When the race for the next president really kicked off and Trump announced he was running I wasn’t worried in the slightest. I told my Republican leaning friends that he was a joke and didn’t stand a chance. I never ever expected him to make it this far and especially not on top. He seems to have all the momentum; the other candidates seem to only be reacting to him instead of running their campaign strategy.

If Mr. Trump can keep this momentum going into the early southern state primaries I think he could very well have a good shot at the Republican nomination. Being an unregistered Democrat (or rather I like the Democratic stance on most issues and find this new brand of Republicanism awful; they’re hateful, fear mongers, racists, anti-science, anti-poor people, on and on, and I don’t mean that every Republican is all those things just that a lot of them are at least a couple of those things). But since I want to see the Dems win, I’m not sure if Trump getting the nomination would be a good or bad thing. Maybe if he is nominated it will be good for a Dem. win. But maybe not.

So I think the time to get more serious about The Donald has already passed. We need to see him as a serious candidate like the Republican voters seem to before it’s too late. 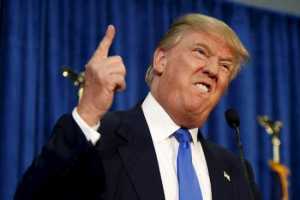 I was watching The Rachel Maddow Show tonight and it showed George Bush giving a speech on the 10th anniversary of hurricane Katrina. It was hard to watch; it was basically a self-congratulatory speech where Bush was pointing out all the great things he did to save the people of New Orleans in their hour of need. And he actually seems to believe what he was saying. I mean, everyone knows that the people that survived Katrina was in spite of all the fuck ups that were Bush’s actions during and after the storm, not because of them. The thing that made the speech so painful to watch was that not only does Bush honestly believe what he says (I think), but he also believes that the American people believe him too. He’s not only completely cut off from the zeitgeist, but he’s delusional.

The speech reminded me of that interview that the guy from VICE, Shane Smith, did with Dick Cheney. Cheney said things throughout the interview about all the great things they did. From the invasion of Iraq, Katrina, everything; everything where they actually oversaw catastrophe after catastrophe, and he seemed to honestly believe what he was saying. That they did everything right, and what made it even worse, Cheney seemed to have no doubt in his mind that the American people believed the same things he did.

That’s what made it like G W Bush’s speech today. Both of them are simply delusional. And it’s sad. What does that say about our country that two undeniably mentally unstable people could reach the top leadership offices in our country. At the very least we should make sure they don’t do any more public events and never be allowed in front of a camera again; so that we can at least preserve some of our country’s dignity and prestige. So sad.

What’s up with Donald Trump? I admit I lean toward the Democrats on about every issue so I am a bit biased, but is Donald Trump for real? About four months or so ago a friend that knows next to nothing about politics mentioned that he liked Trump and I said that he, Trump, was a joke and his moment would pass quickly. I hate to see that I was completely wrong.

I still think he’s a joke but why hasn’t his moment passed? What’s going on? I read somewhere that 75% of the Republican party was against him, so what is he doing on top? Has the ‘leadership’ of the party lost all leadership?

This is just another example that the Republican Party has lost it’s way. It’s no longer the party of Reagan (and no I’m not a Reagan worshiper by any means) or, god help me, even George W Bush. The true ‘back room conservatives, the true leaders of the party’ may have learned the lessons of the last couple of Presidential elections (about women and minorities) but it seems that they don’t have any way of communicating those lessons to the candidates.

This is probably Citizens United at work. I’m sure that’s part of it. Probably a big part, but if that’s all it was then why aren’t the Democrats having the same problems? No, there’s something really wrong with the Republican Party and The Donald is a glaring example. The question is if they will be able to right their ship,and if not will it take the US down with it.

The question is whether the Republicans will be able to right their ship,and if not will they take the US down with it.